When mentioned in tandem with 90’s breakthrough success acts such as NOFX, Rancid & The Offspring, it’s clear that Epitaph Records have a long established pedigree for scouting potential. Now under the management of industry veteran Jon Halperin, and releasing their first single since signing with the label, DREGG are a band seemingly content to interlace the absurd with the thought-provoking, set upon their mission to “unleash the weirdo within”. 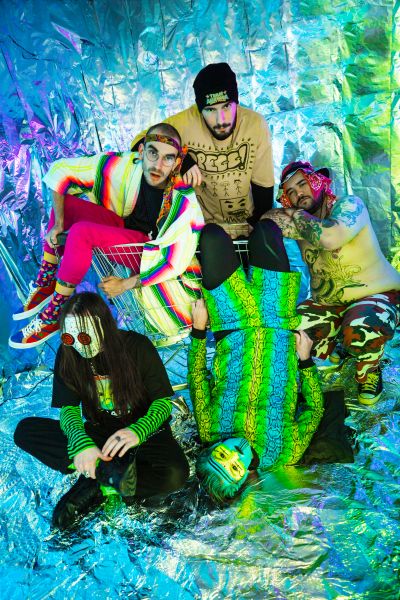 Accompanied with a stellar video that hungers for your attention, new single ‘HECTIC’ is a song that lays bare any criticisms that the band has received on their journey to signing with Epitaph – demonstating with no uncertainty that the old wolf at the door has now been put in it’s place.

Through partnering themselves with a label they describe in their own words as an “innovative yet true to its roots punk label that isn’t afraid to take risks and do things their own way,” DREGG have taken an important step towards showing there’s much more to them than strange masks and shock tactics.

Lead singer Christopher Mackertich’s self-confessed Eminem obession comes across strongly in their parody laden aesthetic, but, from the discordant imigary and absurdist themes of previous single ‘WEIRDO’, to the much more familiar feeling ‘RETURN OF THE DREGG’, their videos hold back little by way of their confrontational nature.

It can be said that, while their sound remains rooted between hardcore and nu metal, a relatively short space of time has overseen the evolution of a visual style which begs to be noticed. Much has been made of their in-your-face antics, but grounded away from politics and firmly in the remit of satire, DREGG would argue that their message is simply one of confidence and being yourself.

Not only is this site totally ad-free, icenofruit.com is run purely for the love of sharing new music and entertainment! Any and all donations are greatly appreciated!